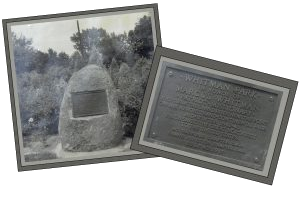 Located in Grand Junction’s Whitman Park, just a few blocks from the Colorado River, is a large granite rock bearing a bronze tablet. The marker was placed July 4, 1917, by the Mount Garfield Chapter, NSDAR, and the Grand Junction Chapter, SAR. The inscription reads, “Whitman Park in honor of Marcus Whitman, Patriot-Missionary who swam the Grand (now Colorado) River near this point on his heroic trans-continental ride, mid-winter 1842-43, which saved the great Northwest to the United States.” 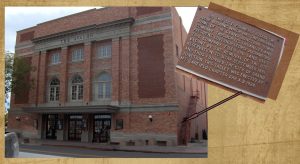 A bronze plaque on what is now the Avalon Theater in the 600 block of Main Street marks the site where the original Grand Junction Town Company stood. The inscription: “On this site formerly stood the adobe building which was the original home of the Grand Junction Town Company. Through its organizer and president, Governor George A. Crawford, this company filed on land left vacant by the removal of the Ute Reservation to Utah, September 1881, and thus founded the city of Grand Junction. This tablet was erected by Mount Garfield Chapter DAR, 1924.” 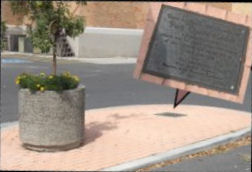 The DAR marker for the Park Opera House is located just inside the south entrance to the Museum of the West, 5th and Ute, in Grand Junction, Colorado. The inscription: “Upon this site in 1891 was built the Park Opera House & modern theater, which was for many years the center of the cultural and social life of Grand Junction. This marker placed by Mount Garfield Chapter Daughters of the American Revolution 1957.” The Park Opera House was opened on June 25, 1892, and was considered one of the most elegant auditoriums in the western area. Completed, it had a stage of 28 feet x 58 feet, steam heat, electric lighting, and a seating capacity of 1,400 with two balconies. 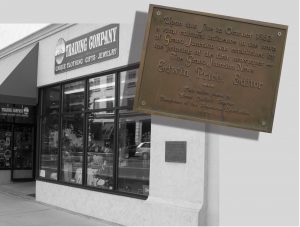 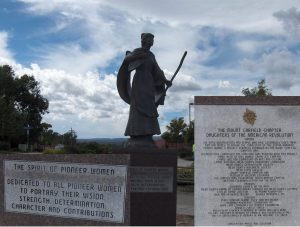 Through the Historical Marker Coalition, the Mount Garfield Chapter, NSDAR, raised the funds, commissioned the work, and erected a bronze eight-foot statue to recognize the contributions of pioneer women. The figure honors the strength, character, and contributions of the many women who helped settle Mesa County and build our community. In 1999, world-renowned sculptor Lincoln Fox created the statue which stands in Grand Junction’s Eagle Rim Park on Orchard Mesa, overlooking the Colorado River, the North Branch of the Old Spanish Trail, the Riverfront Trail system, and much of the Grand Valley. 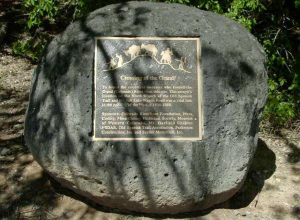 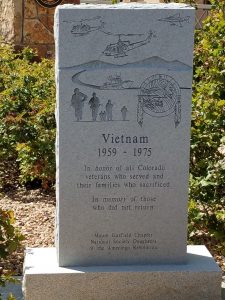 1959 – 1975
“In honor of all Colorado veterans who served and their families who sacrificed.
In memory of those who did not return.”
Dedicated by the Mount Garfield Chapter, NSDAR
May 25, 2015